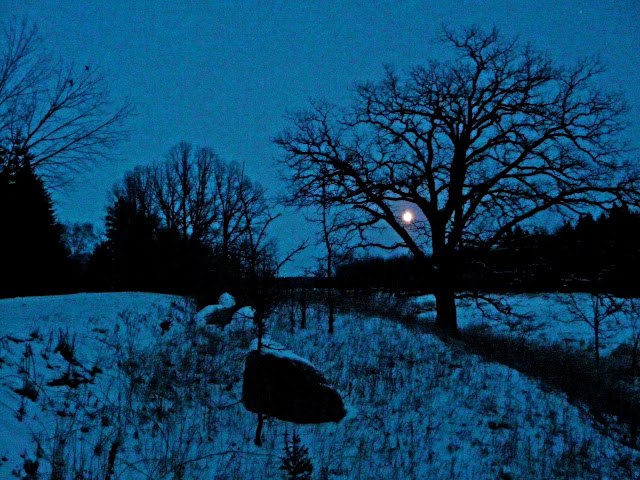 We left Bagley under a bright pre-solstice moon, driving the last ninety-one miles toward home, seeing but briefly a single other car ahead or behind us.

We had left Albertville about seven pm driving thirty-seven miles through heavy traffic to Saint Cloud on I-94. Continuing on west, we drove through forty-three more miles of traffic to Sauk Centre, where we turned north off the interstate onto U.S. Hwy. 71 until we turned onto Minnesota 200 near Lake Itasca State park, then drove farther north to Zerkel and continued onto Minnesota Hwy. 92 for a total of one hundred forty-one more miles, traffic steadily decreasing to the point where my wife began to fearfully comment there was a lot less traffic than usual, even for a Monday night. 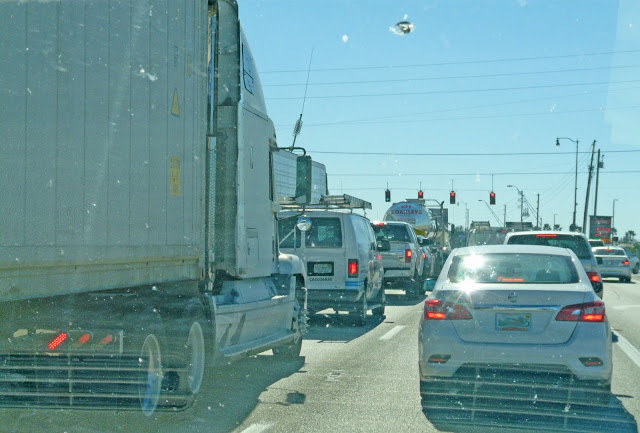 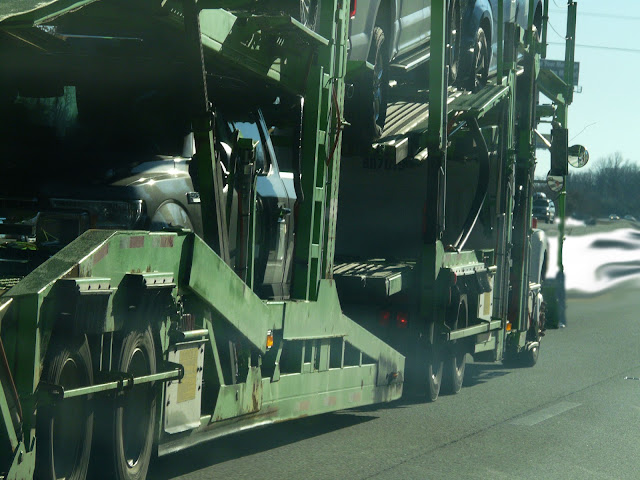 Town after town, lighted main streets were vacant of townsfolk pedestrians and traffic. Storefront windows reflected our passing as though we were going from room to room turning off the lights; I expected whole towns to be dark in my rear view mirror. 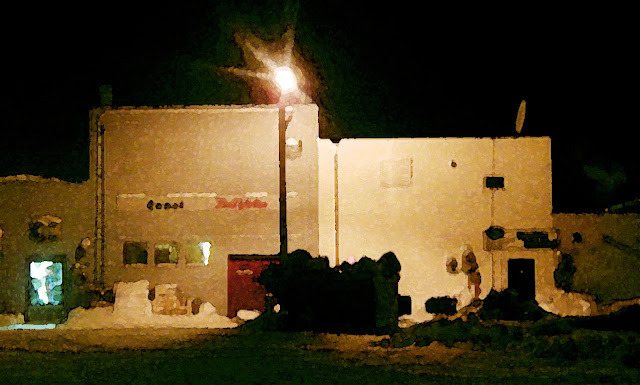 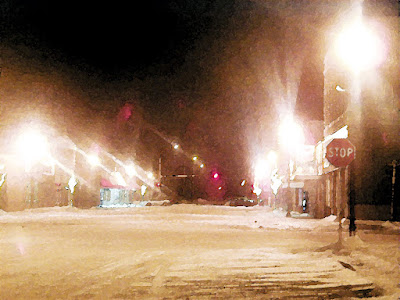 We thought of stopping in Park Rapids or Wadena to get a motel room, and making this a two day trip, but the idea of having to unpack a heavily packed car and then quickly repack it again in the morning wasn’t appealing since I was alert and the roads were so good.

The moon cast a pale-bluish light on the wooded snow-covered landscape, its beauty accented the miles of sweeping curves and long tree-lined downhills north of Park Rapids and along Itasca State Park. 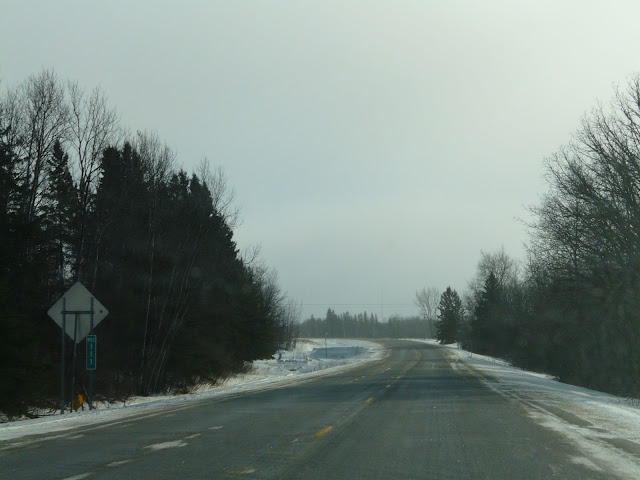 The ever northward route glides through the backwaters of ever smaller towns and unincorporated villages with their occasional horse-drawn buggies with red reflectors and slow-moving vehicle sign on the back. Closed-for-the-night gas stations and cafes await the early risers with their rings of keys; automatic coffee makers set to click-on before the doors are opened to begin the day.

In the warmer months of the year, a lot of large-bodied and small bodied wildlife rather enjoy taunting vehicles by leaping from road ditches, from behind trees, dashing across roads then darting back--or stopping in the road to stare.

In our case, with very low vehicular traffic numbers after turning onto Hwy 71, we saw only one animal, an famously indecisive small-to-medium-sized 'trash panda', who knew where it was going and went, without thinking twice about it. 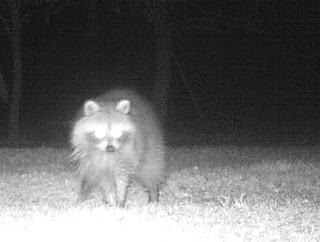 I’ve driven at night for decades all year round, and as I age, I prefer to do it less especially in the city through heavy traffic. I’m not afraid. I know I have to ‘go with the flow,’maintain safe stopping distances and keep my wits about me, even when other drivers act like idiots, so I watch out for the other guy, as well as drive as defensively as I can. It’s all I can do.

My driving preferences are in rural settings, even if I have to watch closely for wildlife and livestock. It helps to have a passenger who can aid in the sight department, but reasonable speed and watchfulness generally ensures safe passage. 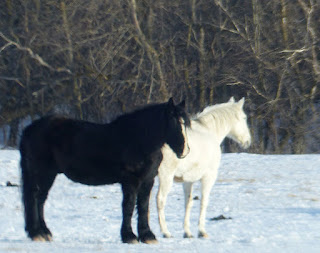 I recall seeing a highway sign in southern Florida warning of a “panther crossing” area. It’s just as well we don’t have many panthers except, allegedly, a black one seen near Lengby, Minnesota, as DNR officials fervently deny the possibility of their existence, but we were far from Lengby.

Road conditions were poor at the beginning of our trip. We’ve had lots of snow this winter--like most of Minnesota--but a recent snowstorm with very high western winds created drifts, icy patches and slush across roadways, so we delayed our trip by one day. 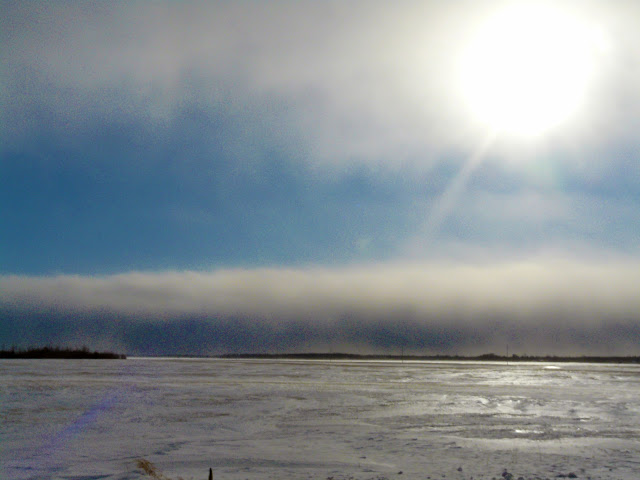 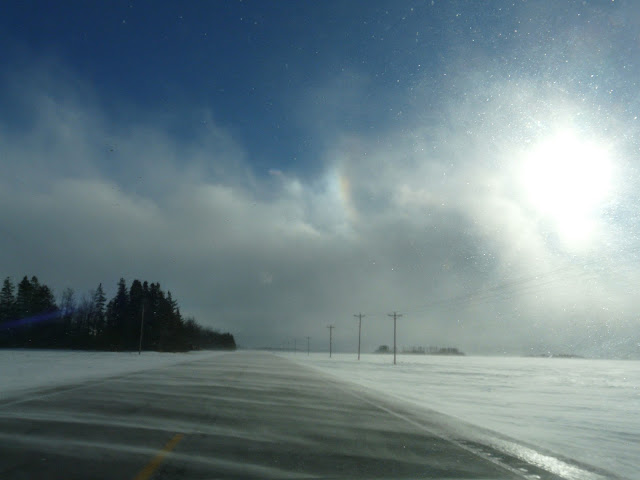 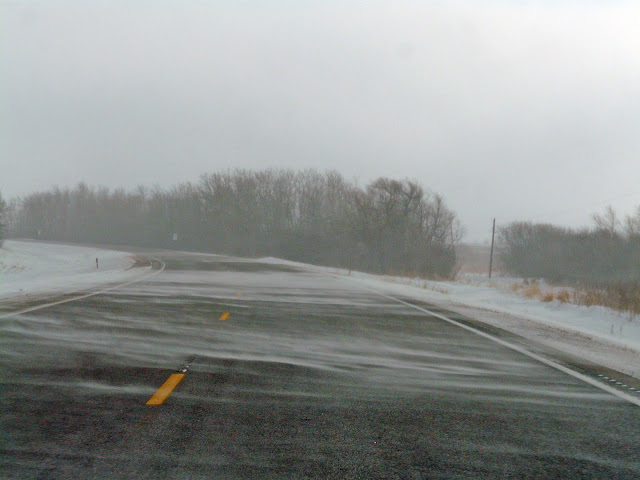 Now Mike and I had the occasion to look out our windows on those nasty days and say,
“I’m callin’ in, I ain’t driving in this ---- er, ’stuff’.”

But Floyd, God bless him, never shirked his duty and always braved the elements to get to work every day, and arrive on time, whether he had to be towed from a few ditches or not. 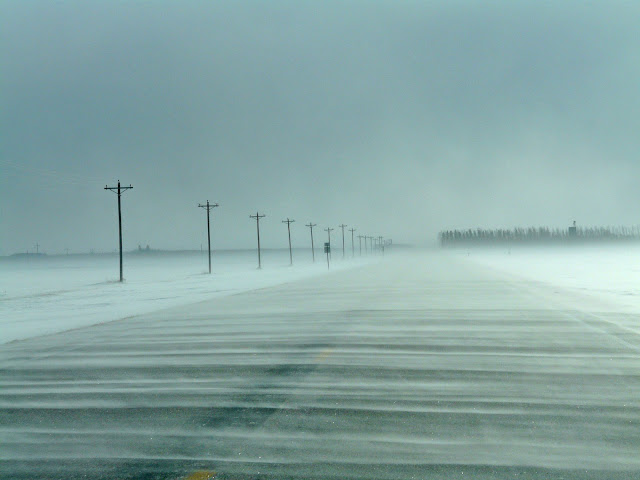 So it is that dedication to destination isn’t limited to Floyd, but also two Roseau County women whom I know, one whose husband likes to brag up their driving exploits to his friend Sven, every time he too balks about driving on slippery, icy, windswept roads in the dead or near-spring of winter, as was this case recently, when they discussed postponing a Saint Patrick's Day travel expo and talk in nearby Greenbush, Minnesota.

“Well, I won't make fun of the weatherman. He has a tough job,” Ula chortled. “Maybe we can still do Greenbush today. Let's keep an eye on the weather. The weatherman says only one more inch, but he's been known to be wrong.”

“Things are supposed to get worse after noon,” Sven replied dryly. Snow/rain/high wind is forecast on all my weather sites. In fact, Floyd called just a few minutes ago to say he saw on TV that they had closed Highway 11 from Drayton to Warroad.” 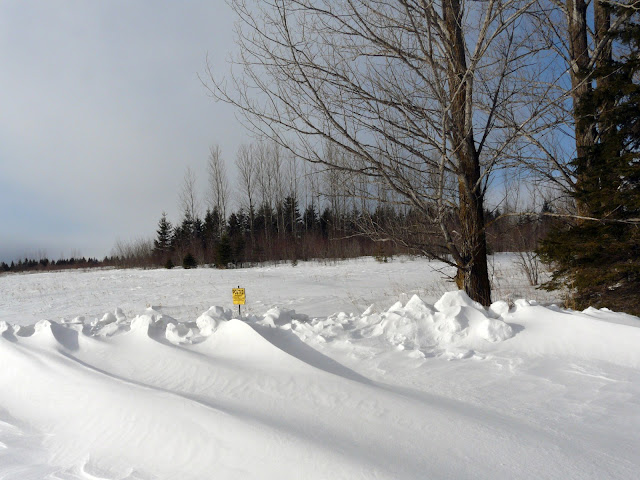 “Well, I know Iclic cancelled his run to Fourtown,” Ula continued sarcastically, recalling an episode of a few years ago, involving our aging neighbor Iclic Vermer during which Iclic claimed the roads were so horrible, he had turned his eighteen-wheeler around at the earliest opportunity and barely made it back home alive, he said.

But despite Iclic's dire warnings, Ula’s second wife, Hulda Einarsdottir, just a wee mite of a woman, and her equally mite-sized sister, ‘Bertha Einarsdottir,’ threw caution to the wind and made it to their destination 125-miles away just in time for their yearly Bones & Birchbark Jewelry Concession Convention in Brrrmidji, Minnesota, that serendipitously coincided with Brrrmidji's Beer Brewing Bash that year.

“Hulda and Bertha left for Bismarck this morning to pick up a load of dinosaur bones for Bertha's new jewelry line,” added Ula, further taunting Sven about his decision to wait out yet another storm than brave icy road conditions and near-zero visibility involving fogged up windows, drizzle, frozen-rut slush roads, slow-to-stall speed traffic and idiots who drive with their high lights on, as they texted: “W-i-s-h  I  s-t-a-y-e-d  h-o-m-e.”

Sven replied, “Geesh, again? Those two are always making me look bad, driving their white Kia, Honda, or Toyota sedans off into the great unknown where even old truckers fear to tread. I do feel such admiration for them steel-willed, white-knuckled, female ice road blazers braving the elements and defying the warnings of teams of professional meteorologists, and trouncing upon the fears of the chicken-hearted men, like myself, sitting safely in their homes on the internet, or in the pubs someplace watching naked women’s mud-wrestling events and blind old men's tobacco spitting contests, occasionally peering through the venetian blinds or patterned curtains to see if the weather has let up and it's possibly safe for them -- sissies -- to venture onto the Roadways of Doom themselves, should the 511 Minnesota Highway Weather site says it all right for travel.

I'm sure H & B made the 379-miles to Bismark just fine despite this storm of the century and are on their way back home with their load of Nort’ Dakota dinosaur bones after stopping for cocktails and dancing in Fargo with sister-in-law Kathy and favorite brother, Pete. Nonetheless, had you and I left, not too far behind them, we would’ve quickly met the multi-car Minnesota Highway Patrol road block on Minnesota Hwy. 11, warning us to turn around,

Didn't either of you two see all the blizzard warnings/road closings posted on TV, the Internet, Code Red email notifications, Facebook, Twitter and NWMW Events Cancellation notices? Now turn the hell around and go home you two old bastards!"

So you see, erring on the side of caution and avoiding that kind of reprimand shows a wee bit of maturation and forward thinking in addition to avoiding putting others at great risk to get you hospitalized and making them responsible for your life, when you're old enough to know better than to act stubborn, senile or stupid yet again.

Attaboy Iclic, it wasn't worth going in the ditch, backwards and out of control. Been there. Done that.