James Joyce and Me 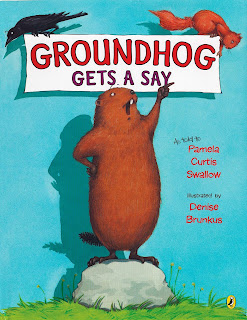 Hello and welcome to an absolutely frigid first Saturday of February on a Sunday. Today is February 3rd, yesterday was the 2nd. Happy Belated Groundhog's Day!

We not only had a polar vortex this past week, but here, at the Wannaskan Almanac, we had a literary vortex of sorts in which the Sunday Squibs fell on a Saturday, and well, here I am on a Sunday.

Like Bill Murray in the film Groundhog Day, let's pretend we're trapped in a time warp that loops us back into February 2nd until some great lesson is learned.

One of our favorite books that comes with a 5-kid recommendation is Groundhog Gets a Say. Learn a few fun facts about groundhogs and enjoy the side conversation between a crow, a squirrel and a young marmot.

Today is a two-fer for James Joyce who celebrated his birthday and the release of his novel, Ulysses, on this day.

The cover is all black except for three words  - James, Joyce, and Ulysses - consuming the top half of the cover in a milky, aged white that has seen better days, and a small, orange stamp of the Penguin logo. The black cover is attached to the rest of the book with four strips of cellophane tape. Yes, I get to call scotch tape cellophane tape because the tape looks old enough to be from an era when I imagine folks regularly used the term "cellophane tape." (Fun Fact: The use of the term Scotch in the name was a pejorative meaning "stingy" in the 1920s and 1930s. Another Fun Fact: Cellophane Tape Day will be May 27, 2019. A Tuesday. Lucky fellow W.A. writer, John B. gets all the good holidays on Tuesdays.)

While Ulysses was first published in Paris - Joyce's residency at the time - my copy was published in 1968 by Penguin Books and includes Ulysses: A Short History by Richard Ellmann. It's not a foreword, but an afterward, and, oh my gosh, this novel is 700 pages long! Who does he think he is? J.K. Rowling? Diana Gabaldon?  Patrick Rothfuss? Of course not. He died in 1941. (Stephen King who?)

Joyce and I both taught at Berlitz schools.

Tuesday - Ulysses gets lost in the polar vortex. Buses are running two hours late and our dear Wannaska region basks in the ice cold glory of having the only school districts in the entire state of Minnesota who do not cancel classes. Rumor has it, motivation may have surrounded a certain hockey game to be held Tuesday night. Even the Star Tribune gives us a shout-out.

The game that WAS played as scheduled: Roseau vs. Warroad hockey.

The game ended 2 - 2, which seems to have some poetic justice on both sides of the rink for daring to go out in this crazy cold.

Wednesday - School cancelled. All the kids home. I pick up Ulysses and give it a go.

The first sentence, "Stately, plump Buck Mulligan came from the stairhead, bearing a bowl of lather on which a mirror and a razor lay crossed," gives me the impression this is going to be a story about a guy on a boat who's about to shave. Why on a boat? A stairhead, of course, because, doesn't that sound like something you'd find on a boat?

-Come up, Kinch. Come up, you fearful jesuit. (No quotation marks?! Double eek.)

As I progress, I pluck words out that support my nautical setting: gunrest, "back to barracks" (he said sternly, with no quotation marks), parapet. The characters are gazing over a sea, musing. There's even watery rumination!

" - God, he said quietly. Isn't the sea what Algy calls it: a grey sweet mother? The snotgreen sea. The scrotumtightening sea. Epi oinopa pontom. Ah, Dedalus, the Greeks. I must teach you..."

(Me: Who's Algy? How did I get from grey sweet mother to snotgreen color? Would scrotumtightening be two words today? Hyphenated or non-hyphenated? Oh my gosh, more Latin. Dedalus? Yeah, I remember learning about him in junior high...Who was he again?)

At about page 15, it dawns on me that maybe Buck Mulligan and Stephen Dedalus are not in a boat.

"A voice within the tower called loudly:
- Are you up there, Mulligan?"

(Side Note: Writing this blog, I am reminded that Mulligan's friend, Stephen, has the last name Dedalus. Therefore, perhaps, Joyce is not saying in the above quote texted, "Oh wow, that awesome Greek dude, Dedalus," but instead, "Hey buddy-with-the-last-name Dedalus, the Greeks, man! I've got to tell you about these cool dudes...")

I flip back to the first page. The "dark winding stairs," are a clue, I suppose. And if that wasn't enough, the much more direct, " - How long is Haines going to stay in this tower?", should have done the trick, setting me straight on setting right there. But no, even then, I postulate that there are towers on boats, too.

And there can be gunrests on boats, can't there?

The key in my misunderstanding lies in the word parapet which is a low protective wall along the edge of a roof, bridge, or balcony. Usually when I encounter unknown words, I skim over them and aim to infer their meaning in the text. (Don't you?)

Apparently, in this case, however, if I'd taken the time to look up this one word, the other context clues would have made way more sense. Such as, "Stephen, an elbow rested on the jagged granite, leaned his palm against his brow..."

I put the business card/bookmark back into its original spot between pages 20 and 21.

I looked up a lot of those skipped over terms today - such as Epi oinopa pontom  and boy, there's a whole lot more that makes sense. According to the biography I kicked the week off with, Joyce had quite an impressive education, which included a talent for languages, especially Latin. It seems he poured out his entire brain and heart into this book.

So, how will I, like Billy Murray, get out of my self-made Groundhog Day vortex? What is the great lesson?

First, don't give up on Ulysses.

Second, look up all of the words I don't know.

And that's the story of James Joyce and me. 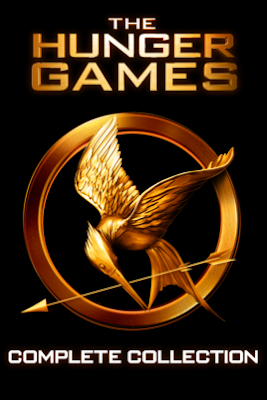 Hello! The WAKWIR is back and today I am officially announcing the finish of one of the series I have always wanted to read: The Hunger Games! Since second grade, I have been wanting to read The Hunger Games because my sister started reading them, and you know, good old me, does everything that everyone else does! But, after my sister read them, my mom decided to read The Hunger Games, thus passing the Reading Age Act: stating that she has the power to decide when us, kids can read certain books. Using this Act, she made it a rule that you have to be at a minimum in 6th grade, or 12 years old to read The Hunger Games. Since I had a plentiful reading list in 6th grade, I did not have time to read it; I saved it for 7th grade. Throughout the year when I couldn’t find a book to read, I would look for The Hunger Games but I could not find the first book of the series. I soon forgot about the series. But then I hit the Great Depression for books. The stock market of book lists crashed and I desperately needed a series to read. My thoughts immediately came to The Hunger Games. I quickly ran to the library and I saw the first Hunger Games book and I grabbed it for my own. I read the whole series in one week, pleasing myself, and found a new series to read: Eragon. My mom then promised me a book club discussion for The Hunger Games at Caribou. We’re going tomorrow, Feb. 3rd.

Well, that's all for today, and I might see you next week.
David.

1990 - The South African Apartheid system of racial segregation begins to disintegrate
President de Klerk announced the unbanning of the African Nation Congress (ANC) and his intentions to release Nelson Mandela.

1943 - The Battle of Stalingrad comes to an end as the Axis Powers surrender
Germany's defeat marked a turning point in World War II.

1925 - 20 mushers embark on a journey to transport medicine to Nome, Alaska, inspiring the Iditarod Race
The Iditarod is the world's longest and most challenging dog sled race.

1922 - “Ulysses” by James Joyce is published
The novel is considered one of the most important works of modernist literature. 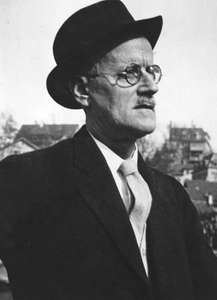 Stay warm and if you find yourselves stuck indoors, take a virtual tour of - or heck, plan a trip! - The James Joyce Centre and make it a great day!