My Daughter the Engineer

December 08, 2018
Happy December and welcome to another Saturday edition of the Wannaskan Almanac - where we don't promise anything, but try our best to be amusing, thoughtful and informative.

I'm counting on Chairman Joe to mention that yesterday was the anniversary (only in the technical, non-celebratory sense) of the bombing of Pearl Harbor. And on this day, December 8, 1941, the U.S. officially entered WWII. (Note: Chairman Joe opted to write about The Beach as a Crime Scene, noting several historical figures including Cicero and his modern-day look-alike.)

Also worth noting today is the birthday of legendary musician Jim Morrison and the death-iversary of the even more legendary John Lennon.

Last week, the older two kids were with me on a work errand. I needed to transport several heavy boxes of promotional materials and the kids were the muscles. A pleasant lady tried to help us release the boxes from the tight grip of the plastic wrapping that encased the pallet of boxes. The pleasant lady asked if someone had a knife. My daughter, who always carries her multi-purpose tool ever since she got it for her 16th birthday, didn't have hers. "Somehow I forgot mine," she mumbled. She arghed and reminded us that she always carries her MPT.

My son, who can never be relied on to have a knife, surprised us (his mom and sister) by pulling a small, single-blade pocket knife from the saggy pocket of his gray sweatpants.

That night, as we sat around our kitchen table, with her MPT in hand, my daughter set to work repairing one of her little sister's prized possessions - a tiny porcelain trinket box in the shape of a book. The pin holding the hinge together had worked its way out of its intended slot - either mysteriously or mischievously - and was lost, presumably on new adventures, among the bric-a-brac in her bedroom.

The elder daughter fashioned a new hinge by cutting a length of wire from a paper clip. She triumphantly placed the little box in front of me. In a quiet voice she said, "Thank goodness for boys."

"That lady. She said, 'thank goodness for boys.'" 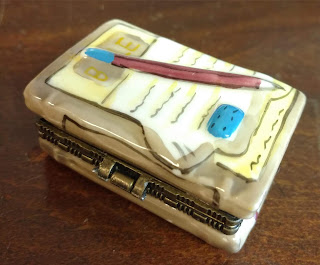 - Our W.A.K.W.I.R is on sabbatical today, attending a Lego League competition in Northome. He seems to be taking a lot of sabbaticals. I promise, I am sharing with him your grief and distress prompted by his absence on the blog. Will keep working on that.

- The 1st Grader played the tubano drum in her concert this week.

- The toddler is on a creative kick, making up songs, rhymes and stories focused on one topic: poop.

1991 - Romanian Constitution comes into force
Passed through a referendum, the Constitution marked a return to democracy for Romania after 42 years of Communist rule.

1991 - Creation of Commonwealth of Independent States
The international organization was formed by Belarus, Ukraine, and the Russian Federation as a political forum for members of the former Soviet Union.

1987 - First Intifada begins
The Palestinian uprising against the Israeli occupation of the Palestinian Territories began after an Israeli army truck attacked a car and killed 4 Palestinians. The Intifada ended in 1991 after the Madrid Conference.

2004 - Dimebag Darrell, American guitarist, songwriter
Per Wikipedia, "He was considered to be one of the driving forces behind groove metal, and is also considered by many to be one of the most influential guitarists in heavy metal history.He ranked No. 92 in Rolling Stone's 100 Greatest Guitarists."

1980 - John Lennon, English singer-songwriter, musician, producer
"If everyone demanded peace instead of another television set, then there’d be peace."

1978 - Golda Meir, Israeli educator, politician, 4th Prime Minister of Israel
The only woman to have served as Israeli Prime Minister.
"Don't be so humble - you are not that great."

1903 Herbert Spencer, English biologist, anthropologist, sociologist, philosopher
"Those who have never entered upon scientific pursuits know not a tithe of the poetry by which they are surrounded."

1864 - George Boole, English mathematician, philosopher
"That language is an instrument of human reason, and not merely a medium for the expression of thought, is a truth generally admitted."

How ever you choose to spend your day, make it a great Saturday!