September 01, 2018
Good morning and welcome to another energetic and informative posting of the Wannaskan Almanac. Today is the FIRST DAY OF SEPTEMBER.

Yes, that's right, folks. August is done. You know what that means?

Some of you have already started school, but at our house, kids did all they could to soak in the rest of summer during Week #14 - i.e. our LAST WEEK - of Summer Vacation.

We got in our one and only trip to my mom's cabin. It was a quick one, leaving Saturday morning, with some basic groceries and a couple of fishing poles.

Until the age of 12 (mostly), my childhood was spent on Round Lake, a few miles south of Nisswa on Highway 371. My grandparents owned the Minnohio Resort on Round Lake. In fact, I found this Brainerd Daily Dispatch photo in the online archives from June 6, 1962 that shows area chamber members visiting my grandmother (Mrs. Robert Lamser), her mother-in-law (Mrs. Alfred Lamser), and my aunt (Barb Lamser). (NOTE: Interestingly enough, the headlines for that day also included, "Rail Workers Get Pay Boost in Agreement: 10.28-Cent Hike Settles Wage Dispute" and "Republicans in California Choose Nixon in 2-1 Vote" in the 1962 California Governor's race.) 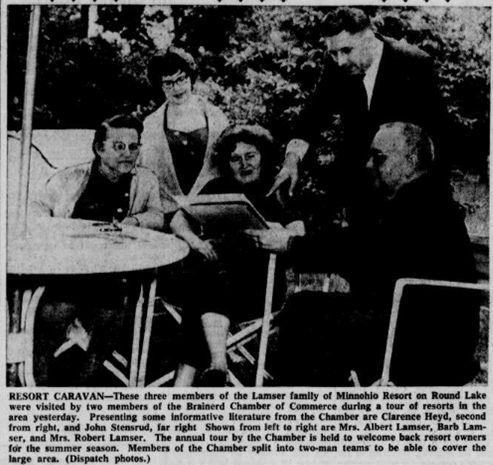 While the cabin we have today wasn't part of the original Minnohio Resort (it was two doors down), I still love it.  That whole stretch of "service drive" (what we called our little road running parallel to the highway) is cramped and noisy. But the highway traffic, the "yahoos" next door joking around their campfire, the lapping waves and blowing wind - are all peaceful to me. Without fail, nostalgia surfaces every time I go there. Carefree happiness. My childhood worries no greater than which dock we would swim from, how many minnows we would catch with our beach towels, if Uncle Dave would take us out in the boat, if we would play shuffleboard over at Panser's Resort and if anyone was up for hoofing it over to the resort that had the candy store. (It's probably not that far away, but in my child's mind, it was a serious trek. Down the service drive, up the hill, through the woods, cutting through another resort, and then down Ojibwe Road for seriously, something like a MILE.)

Considering the safety conscious world we live in today, I delight in telling my children how I used to cross the busy highway ALONE to get to my best friend's house. That us kids would bike back and forth from Round Lake to the docks on Gull Lake at the end of Cinosam Road. That my best friend and I used to walk along that busy highway to North Long Lake. (Oh, wait. I haven't told them that part.)

Saturday night, kids and I went to the movie theater - me, Crazy Rich Asians, them, the latest Mission Impossible movie. Apparently we haven't taken our kids to the movies much because they were shocked when I told them we could smuggle our own snacks into the theater. "But it's against the law!" my oldest son protested, i.e. the one who would normally be game for this kind of criminal activity.

Sunday was a lazy day, making our way back to Warroad, trying to navigate between the forecasted storm fronts. It's true what they say about some of the best quality time with kids is during those long car rides.

Monday we headed to Grand Forks for *gulp* school shopping. This dreaded holiday nearly sucked the life out of us as we tackled each kids' list. And I had it easy - only two kids to take instead of all five! (NOTE: Sonic restaurant commercials are way better than the actual food.)

I spent the next two days in serious work mode as the rest of our family crew would be returning from the Czech Republic on Thursday. I don't know what the older kids did except to say they are still alive. (NOTE: This is a joke. I totally know what they did. Mostly.)

Thursday, the older kids had their first Cross-Country meet and the school Open House - two more signs of inevitability that school is right around the bend. Warroad Public School has undergone a major transformation with a new early learner's wing and a remodeled elementary school. The high school still looks like a work in progress, but I say, hey, if they can pull it all together in the eleventh hour on HGTV, they can do it here, too.

I headed up to Winnipeg to pick up the others. Family reunification is both a happy occasion and a culture shock as we all adjust and get re-acclimated to operating as a family unit of seven.

Friday, I gave up all pretense of getting any work done. The littles, still on Czech time, woke up ready to start the day at 2:00 A.M. We made cut-out cookies (pink hearts and more blue batmen) for today's family gathering, visited the little kids' classrooms, bought more school supplies and had a real dinner (healthy chicken nuggets, roasted potatoes, salad and cookie dough the older kids made, for dessert) at a normal time (6:30 p.m.) gathered around the table.

We wrapped up the evening divvying up the Czech treats (Tatranky oplatky and Milena chocolate bars) and playing the Swedes against the Finns in toy hockey, a gift from the Czech grandparents. The littles and I were in bed by 9:00 p.m. (and up again, this time, at 4:00 A.M.)

All in all, a nice way to wrap up the summer. 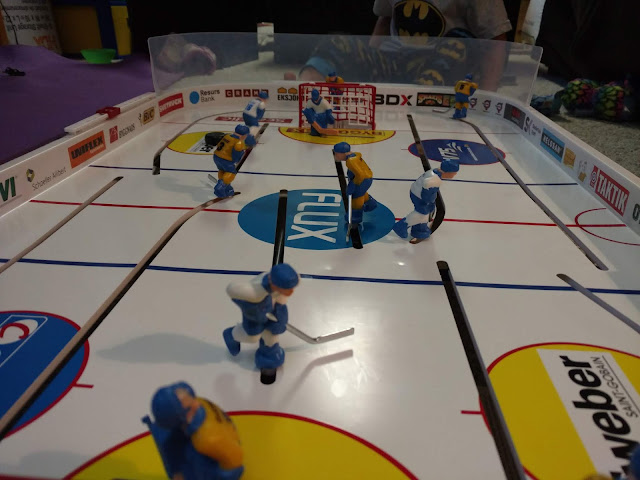 Our W.A. Kid Writer-in-Residence is on sabbatical cutting the grass.

2004 - 350 people and children are killed in a massacre in Beslan, North Ossetia
Armed Chechen rebels took over 1000 people including school children at a school. The rebels demanded international recognition of an independent Chechnya. The hostage crisis lasted for 3 days and ended after Russian troops stormed the school.

1985 - The Wreck of the sunk ship Titanic is found in the North Atlantic Ocean
A French-American expedition group found the wreck, which sunk on 14 April 1912 on her first voyage from Southampton, UK, to New York City, U.S.

1979 - Pioneer 11 makes its closest approach to Saturn
The NASA-built space probe was the first probe to encounter Saturn - it flew by the planet at a distance of 13,000 miles (21,000 km). After its flyby, the probe went on a trajectory to go outside the Solar System. All contacts with it were lost a few weeks later. 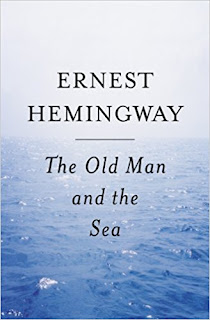 1952 - Life magazine publishes parts of the Old Man And The Sea
One of American author Ernest Hemingway’s best-known works, the novel tells the story of an old man and his fishing misadventures. Within a few days of the publication of the excerpt, 5 million copies of the magazine had been sold.


Today is our annual Family Gathering at Auntie Grandma Barb's. It's the only time of year my cousins, brother and I are referred to as "the kids." May you enjoy your family, today too!

Or, if you'd rather hunker down and hibernate before "ordinary time" resumes, here's a 10 New Books to Read This Labor Day Weekend list. (I want to read America for Beginners by Leah Franqui.)

Either way, make it a great Saturday and Labor Day weekend!