September 22, 2018
Good morning and welcome to another Saturday edition of Wannaskan Almanac. Today is September 22nd. 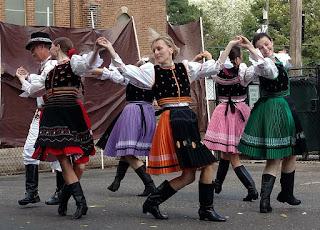 While in the Twin Cities this last weekend, we had a chance to stop by the Czech and Slovak Cultural Festival in St. Paul. On our way down the freeway, upon hearing we were going to the Sokol hall, i.e. where the kids attended Czech camp two years ago, the first grader said, "Agh. I hate that place!"

The little city block and parking lot were packed with booths, vendors, performers and guests. It was a chance for hubby to connect with his compatriots, for me to speak some rusty Czech, for the little ones to burn some energy in the bouncy castle and for the teenagers to discuss in earnest just how uncool adults (especially their parents) can be.

But she who laughs last, laughs best. Who do you think wins the 50 crown bill look-a-like contest?

Here are some more photos of the fun things we did and saw. By the time we left, the kids actually admitted to liking it (a bit). Even Lucie.


This coming week over in the Warroad parts of the Wannaskan region, there will be a performance at the Warroad Public Library about the life of Walt Whitman through his writings called Leaves of Grass- Illuminated. Walt Whitman is considered one of America's greatest poets and is heralded as a national literary treasure for his contribution, according to the Poetry Foundation, as "the first writer of a truly American poetry," despite his limited education. 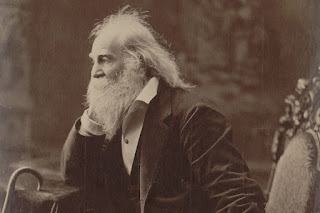 Leaves of Grass was something I latched on to as being superbly significant in my teens and early twenties along with the writings of Edward Abbey, Ernest Hemingway, Shel Silverstein, and the team who wrote the series Sweet Valley High. I haven't read Walt in a long time and look forward to seeing if/how my understanding of his work will change after giving it a read from my middle-aged vantage point.

If you miss this performance, you can catch it next summer at the Guthrie Theater. Book your tickets now or come to the library next Thursday, September 27th @ 6pm for FREE. 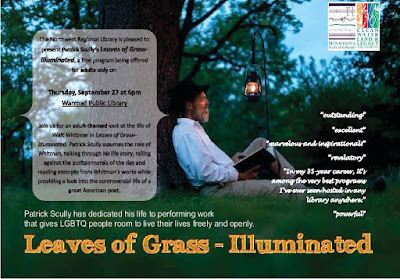 By the way, next week is coincidentally (or ironically?) Banned Book Week! The 2018 theme is "Banned Books Silences Stories." Whitman's Leaves of Grass was a hit on this list in his day. Here's a brief explanation why.

Here are some ways you can raise awareness about this important issue:

1. Share. - Use this graphic in your emails and your social media. Get more graphic goodies here.

2. Know what's on the list. - Peruse the many lists of banned and challenged books and share your favorites in the comments section below or on whatever social media platform you use.

3. Talk about it. - At your next kaffee klatsch, after you take a bite of danish and sip your coffee ask, "Hey, dj'all know it's Banned Book Week?" This is followed by, "You don't say!" and then you say, "Ya! And wouldntcha know it, (insert favorite book title from the list here) is a banned book!"

4. Get down to business. - If yer really fired up and want to add some "walk" to your "talk," the American Library Association (ALA) has a Banned & Challenged Books website devoted to helping you advocate.


Fun Facts from the Kids

The older kids are at the Milaca Mega Meet today, which is "the largest single day High School Cross Country Meet in the world." Our Wannaskan Almanac Kid Writer-in-Residence prepared a blog post for you today that his Mom-Editor didn't deem quite ready for publication. Stay tuned!

In the meantime, I'm pleased to report the Toddler is now potty trained. I give all the credit to my husband who made the unilateral executive decision to proceed with training despite our (read = my) busy schedule. (Credit is further extended to his family and all the other Czechs who admonished, "What? He's still in diapers?!)

When a spouse makes such a decision, admittedly there's a secret hope it will fail disastrously - at the very least that all floor and upholstery cleaning responsibilities shall be placed upon the decision-making party. Alas, the guy got lucky and the Toddler had only a couple of major accidents, to which I gladly (okay, gleefully) handed over the paper towels. But more importantly, diapers are retired, and really, I am far happier to give hubby credit than to gloat, "I told you so."

And in case our W.A.K.W.I.R doesn't mention it next week, I'd like to add here that Christopher Mick, aka The Space Guy, came up to Warroad on Tuesday and gave an awesome space presentation for the two Warroad Lego League teams. According to this Hudson Star-Observer article, "to serve the surrounding areas, Mick became a NASA Solar System Ambassador, part of a nationwide educational program that connects volunteers with the public to learn about NASA's current missions and discoveries."

While the middle schoolers asked intelligent questions about space trash, space boredom and mini asteroids, the adults were all about the anti-gravity coffee mug.

1980 - Iran-Iraq War begins with Iraq invading Iran
It is thought to be one of the 20th century's deadliest and longest conventional war. It ended 7 years later with no decisive victory and massive losses, both in terms of human lives and in terms of economy to both sides.

1979 - The American-run Vela satellite detects a series of bright flashes over the Indian Ocean
The flashes were thought to be associated with atmospheric nuclear explosions. Some experts theorized that they were caused by joint Israeli and South African nuclear exercises. The governments of both countries denied this and to date it hasn't been confirmed whether the flashes were indeed nuclear explosions, and who was responsible for them.

1975 - Assassination attempt on US President Gerald Ford is foiled
FBI informant Sara Jane Moore's attempt to assassinate the president in San Francisco failed due to a faulty gun and the efforts of ex-FBI agent Oliver Sipple who tackled her.

The first of 4 musical works of art that constitute Wagner's Der Ring des Nibelungen, Das Rheingold was played at the National Theatre in Munich. The other three music dramas are Die Walküre or The Valkyrie, Siegfried, and Götterdämmerung or Twilight of the Gods.

Hubby tells me it's going to be a cold weekend. Cuddle up with your loved ones and a good book of poetry and make it a wonderfully relaxing and contemplative Saturday! 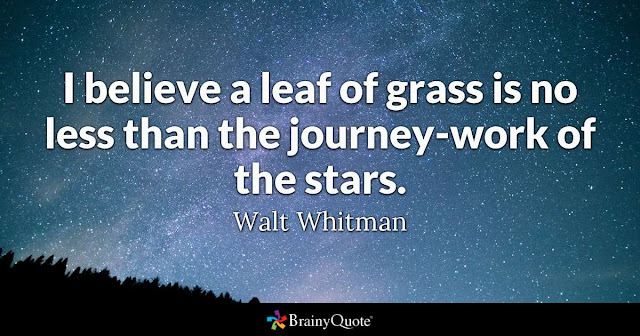