October 09, 2018
Today is October 9.  It is the 282nd day of 2018.  There are only 83 days left in this year, so if you are planning on a New Year's Eve party you need to get cracking.  A good party usually takes 90 days of pre-planning, planning, rehearsals, recusals, and contemplation according to the experts at Modern Bride magazine.  Please do not try to verify that information.
October 9 is Leif Erikson Day.  Leif Erikson was a Norwegian who was reported to have gone off course while sailing to Greenland in about 1000 A.D..  He is believed to have landed in Nova Scotia, Newfoundland, and Labrador before returning to Greenland.  There have been Viking ruins found in Eastern Canada. 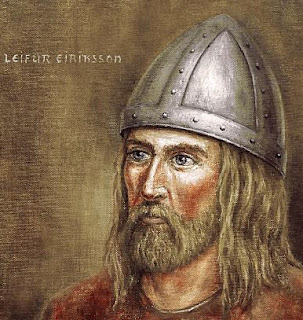 On this day in history:768  Charlemagne and his brother Carloman are crowned Kings of the Franks.  They reportedly were honored this way due to winning a hot dog eating contest.
1000  Leif Erikson lands in America.
1635  Roger Williams was banished from the Massachusetts Bay Colony.  His calls for religious tolerance were not tolerated by the Puritans.
Today's funny quote is from anonymous.  "My cell phone is acting up, I keep pressing the home button but when I look around I am still at work."
It would be kind of nice to spend more time at home.  As a teacher, I get almost three months off every summer to sit at home, fish, travel...whatever I want.  As a rule only self-employed welders and retirees get more time off than teachers.  A Wannaskan welder actually built his own boat and sailed it to Norway.  It was after Leif Erikson's trip, so you probably won't read about it in your history books.  You can read about it here though.
Thanks for reading.  If you are celebrating Leif Erikson Day, won't you send us a picture?  You can email it to ffefreekshow@hotmail.com where we will share your revelry with others.  It is part of our new strategy here at the Wannaskan Almanac.  You might say we are turning over a new Leif.