September 15, 2018
Good morning and welcome to another sunny Saturday at the Wannaskan Almanac. Today is September 15th.

I thought about hanging out the "Gone Fishin'" sign again this week. Or in my case - "Gone Writin'" - but somehow it just didn't feel right to play hooky two weeks in a row.

And I know the desire to skip out isn't just because I am physically out of town today, but because, well, honestly, I don't know what to write about now that the kids are all back in school.

Kids back in school means routine - i.e. the same 'ole rigmarole - or to borrow from Catholic speak, we're now in Ordinary time. September to May is anchored in routine and I just can't seem to drum up much excitement about that. In fact, I feel kind of bad now for wondering (= whining) a few weeks back if it wasn't time to get back to work. Now we're all back to work, even the toddler started preschool, and there's an air of sadness in parting ways with summer. 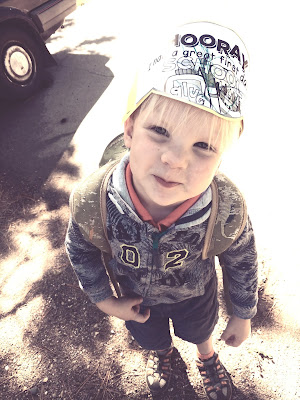 This week marked the 17th anniversary of the 9/11 attacks. As a kid, I heard countless people tell the story of The Day President Kennedy was Assassinated. I marveled at how they could remember the minutiae of that day; not only where they were, but the color of their sweater, if they were eating an egg salad sandwich and the coffee was cold and bitter, or if they'd skipped lunch all together and had just sloshed hot coffee onto their white blouse - the one with the blue embroidered flowers. The smell of asphalt. If sweat formed on their temple or if clouds made a chill. The tears of a teacher and an eerie silence save for the tick-tick of the second hand making its way indifferently round the clock. These stories left me curious, wondering if I would ever experience something to that magnitude that would forever stay locked into my sensory memory.

I remember it was a Tuesday. It had been a good teaching day. The weather was sunny and warm - something to be celebrated as fall inched its way closer to winter. My head was filled with the usual sundries of routine as I made my way home. I felt happy. Content.

The phone rang. One of the German teachers called to tell me she was so sorry. Airplanes had flown into the World Trade Center. It was 5:00 p.m. our time in Czech Republic.

My mind couldn't connect the dots. She was telling me this in German, the words sounding so strange in my ears because this wasn't the kind of vocabulary we usually used when we spoke to each other. She had to say it three times.

I looked out the window of our eleventh floor apartment. The sun was shining on the hills, the yellows so pretty in the golden light. Brown fields and fading green meadows in the distance were tidy and peaceful. I had just been thinking about what to cook for dinner, when my husband would be home, about the little baby that would be born in December. What I was hearing my friend say on the phone did not align with my surroundings. With my reality.

We didn't have a television, so I hurried down the steep hill from our apartment building to our stop at the end of the tram line as fast as my pregnant body could go and caught a tram that took me two stops east to my friends' apartment.

On 9/11, I sat with my friends, an Iranian family, watching the news footage on Al-Jazeera, wondering how this would affect us. Specifically, how it would affect them. I knew they wanted to move to the U.S. and join their relatives. How would the world see them now? With suspicion, I guessed.

I watched the horror and felt oddly disconnected. I was an American living in Czech Republic. I was about to have a baby. What I was seeing on the television was not my personal reality.

A friend told me this week about her experience stateside; how people came together, believing in the value of solidarity as Americans.

What I remember most of that day was my disconnectedness. It simply didn't feel real.

The day after the attacks, I went to work feeling guarded. Could people tell I was an American? What would they say to me? Was I supposed to be a spokesperson for the United States? How would my relationships with my friends change? Would fear shift my perceptions? Being abroad, I didn't experience a nostalgic banding of a nation. I felt vulnerable.

And yet, the routine - the daily normalcy - pushed me through the day. I still had students to teach. I would go home on the tram the same time and route as the day before. I had groceries to buy, dinner to prepare and a baby would be born regardless of the state the world was in.

I think of these things each year on the 9/11 anniversary. Normalcy against tragedy. Tragedy disrupting normalcy. Routine tipping the world back on its axis. And the fragility and resilience of humanity.

We threw a wrench into the proverbial system and took kids to "the Cities" for some fun with a family friend while hubby and I celebrate our 18th wedding anniversary sans kids. They're happy, we're happy. It's a happy day.


Saturday’s Entry…
This entry is not like the others you’ve read. This blog post is kind of like a cliffhanger post. Although, next week Saturday’s post, will have a trip to the cities, and a Cross Country meet to write about.
So, I shall say, goodbye, and yes, I will soon write on the Wannaskan World.

1963 - A Ku Klux Klan bomb kills 4 young African-American girls
4 members of the white supremacy group, set off a timed bomb at the 16th Street Baptist Church, a predominantly black church in Birmingham, Alabama. The bombings marked a watershed moment in the Civil Rights Movement in America.

1935 - Nuremberg laws instituted by the Nazi party are put into force
The laws revoked citizenship for Jews, forbade them from having relationships with people of non-Jewish origin and made the swastika the official symbol of Germany.

1894 - Battle of Pyongyang ends with decisive Japanese victory
The battle was a major land battle took place between the forces of Meiji Japan and Qing China during the First Sino-Japanese War.

Wherever you are in the world, say hello to your neighbors, smile to strangers and fill your Saturday with compassion.